DANCING AT THE EDGE OF THE WORLD

My imagination makes me human and makes me a fool;
it gives me all the world and exiles me from it. Ursula K. Le Guin

The program of Kunstpavillon and Neue Galerie Innsbruck 2021/22 is entitled Dancing at the Edge of the World, alluding to the eponymous essay collection by Ursula K. Le Guin. In this, the science-fiction author outlines alternative social and societal realms of possibility that are not anchored in a colonial, patriarchal, and xenophobic narrative structure.

In a present shaped by a pandemic, virulent socio-political issues and the big question of how we live together seem to have fallen by the wayside. The nation state assumes the role of a crisis manager, while visions of a backward-looking future solidify and historical amnesia sweeps across broad sections of society. But surely, isn’t this very moment one with the inherent potential to accentuate speculative utopias and counter-narratives, to renegotiate ways of living together and empathy in a local and global context? And to look for ways to integrate diversity on our planet into everyday considerations? How can our relationship with the environment be shaped responsibly? What ways of living together have proved/or could prove to be beneficial? And how can a conscious approach towards the past and its vivid heritage succeed?

The beginning is marked by two exhibitions: OPTIONS (Riccardo Giacconi, Kunstpavillon) and ARCHIVES OF RESISTANCE AND REPAIR (Shiraz Bayjoo, Maeve Brennan & Onyeka Igwe, Neue Galerie Innsbruck). The artistic works in both exhibitions question prevalent knowledge regimes and recount stories that are hardly considered in the powerful canons of history-making: While Riccardo Giaccconi develops references between the South Tyrolean resettlement implemented by Mussolini and Hitler and the current political climate in Europe; Shiraz Bayjoo, Maeve Brennan & Onyeka Igwe look for possible ways of re-evaluating historical materials from a decolonial, anti-imperialist perspective.

For 2022 a collaboration with Ursula Beiler, Enar de Dios Rodríguez, Hannelore Nenning, Elsa Salonen, Innsbruck International: Biennal of the Arts amongst others are in the making.

Dancing at the Edge of the World forms the first program cycle under the artistic direction of Petra Poelzl. 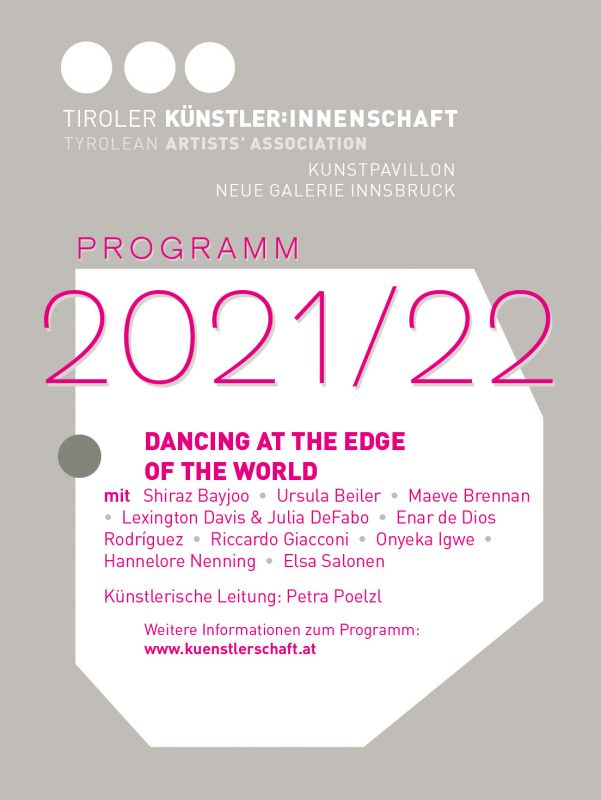