For the first time in a joint show, painters Matthias Bernhard and Turi Werkner are now presenting solo works and co-products in the exhibition Lokalkolorit / Globalkolorit (Local Colour / Global Colour) at the Kunstpavillon. The fact that colour plays an important role as a material for both artists may be surmised from the chosen title. “Kolorit” can also be read backwards as “Tirol ok”: pure coincidence, says Werkner, but pointing perhaps to similar unconscious artistic strategies. For besides / despite / because of all their stylistic, technical and methodological differences, they are united by an interest in the fertile ground between nonchalance and indifference, idiocy and genius, chance and intention. They turn not only towards the sudden but equally towards the permanent, and drawing is often the starting point for their artistic production. In both cases, the difference between picture and picture / book and book / work and work seems more important than the individual picture / book / work.

After their initial encounter at an event held by Gunter Damisch’s class at the Academy of Fine Arts in Vienna in 2011, Turi Werkner’s attention was drawn to two revised booklets by Matthias Bernhard. Out of respect for the other’s artistic work in each case, 14 unique books–a total of approximately 750 pages–have been created as co-products under the title Betretene Projekte, which can be seen in two showcases in the left wing. The books exemplify how differences in mentality and age (MB born 1985, TW born 1948) can have a positive effect. Both artists appreciate the features of book production, even if they are characterised by different painting methods. For Turi Werkner, book production allows him a way of working that he sees as cinematic, literary or painterly variation, just like a piece of music. A theme is thus extemporized on several pages. In his own book painting, Werkner usually proceeds page by page, whereas in the co-products (because of the interventions by his colleague) this is not always possible or indeed necessary.

What attracts Matthias Bernhard to books is the opportunity they offer to juxtapose different pictorial possibilities within a given space, in a small format, or to arrange them next to one another through a sequence of pages and so jump from one to the other faster. But nevertheless, for him it is a time-consuming act of painting the pages: he scrolls back and forth, overpaints, leaves them be for a while. “Working together with Turi Werkner,” Bernhard says, “allows me to distance myself further from my own habits, my own work, and at the same time to approach it more closely, to be far bolder (this is perhaps the decisive aspect) and in this way, together with Turi, to arrive at something new and surprising.”

The resulting joint books also demonstrate that every now and then, they succumb to the urge for maximum concentration and to a play with the unconscious. In addition to diverse painting materials (acrylics, acrylic varnish, watercolour, collage, pencil, emulsion paint, coloured pencils, floor varnish, gouache, lacquer, touch-up pencil, glue, oils, ink, wax crayons, etc.), language is an important element in the books.

A special booklet is appearing for the exhibition: Die Vorhuld, die Vorhuld! by Matthias Bernhard and Turi Werkner, 2018-19.

Werkner has included the co-products in his own inventory and numbered them. He began to make books as early as 1968, and he has dedicated himself almost exclusively to the medium since 2006. “The unique books are my passion and my speciality. I have made more than a thousand of them, and I want to see an entire library full. There are books of all kinds: from the smallest of booklets (2 x 2 cm) to the largest albums measuring 1.5 x 2 m and weighing dozens of kilos; books with 480 pages and those with only one page; books in colour and others in black and white. The time I spend working on a book can range from half an hour to eighteen years. I deal with a huge range of motifs like Artificial Beards, Object A, Polyps, the Influence of Television, the Winter Crab, Heraldry, etc. I use watercolours, ink and poster paint, acrylics, alcohol, all kinds of pencils, varnishes, glue, feathers and brushes, and sponges. To dry the pages, I use several incubators and a wind tunnel.”1

The days when the book was worked on, how many pages it contains, and whether one or more pages have been removed (work statistics) are noted on the inside of the back cover. Starting with number 857, Wo der Kopf aufhört und die Frisur beginnt (Where the head ends and the hairstyle begins), 2015, the selection ends with number 947 Aussehen und Anblick (Appearance and Aspect). Other titles include, for example: Strabismus, bzw. nimm die Nase aus dem Mund, (Strabismus, or take your nose out of your mouth) 2017, Porträts als Konvergenzfiguren (Portraits as Convergence Figures), 2017 or Kropf oder Bart, (Goitre or Beard), 2017. The titles, often pointed and functioning as commentary, are usually determined during the production of the book and add a literary level to the works.

Matthias Bernhard’s picture titles also unfold further spaces for association, which may comment, add precision or relativise. For example, in the case of his URZUSTANDSBESCHREIBUNG – oder: Als die Erde noch rund war (pavianeser WUCHTKLUMPEN) (Description of the original state – or: When the earth was still round (Pavian lump of force)), a work totalling 12 parts on paper, which is installed as a block with 3 x 3 = 9 works in the entrance area to the Kunstpavillon and enters into direct dialogue with Werkner’s library. In sum, the individual sheets, in a similar way to the books, permit a concentrated view. Another analogy is the motif of heads in the broadest sense. In Bernhard’s work heads, faces, eyes, spirits and creatures can be seen in the individual fields.  On the sheets lying on the floor in his studio, he tried, in a similar way to archaeology, to uncover possible underlying layers.

The picture space is measured in a physical act, here marching across the surface is part of his artistic practice. Different techniques, depending on the respective carrier material, enable different approaches and ultimately determine the character of the paintings.

Bernhard’s works are created in an intuitive process, referred to as a process of transformation, during which he tries to make memories, sensations or experiences tangible, to visualise the invisible. (Classical themes such as transience, love, fear and death also play a role here.) “Art makes itself (visible), you only have to seize the right moment to intercept it from time to time,” he says. Time is a key factor. Images are often edited and condensed over several years, are “commented on” by other images and “take each other further”, being created at different speeds and using different methods or approaches. Only when the code–Bernhard’s own system of signs, which he understands as finding an original language or a narrative or graphic element–forms a closed space is the picture finished: one that ideally surprises us and yet remains a mystery.

The Großer Eulenheuler in the left wing was originally based on an already finished, horizontal format charcoal drawing, which was then overpainted in additional layers, wet on wet. The background and charcoal drawing shine through in parts, so connecting with the interacting spots of paint. Painting is not an expressive act here: it is more about “disappearing” behind the picture. In this way, the painting itself becomes a person, a creature, an object, a signifier, and enters into dialogue with the two pastose-style paintings in the back room, “intensifying” them. Measurement of the picture surface or the picture’s composition is carried out with seemingly figurative elements, comparable to a kind of écriture automatique that moves between line, biomorphism and ornament.2 Some ideas of the Cobra group (Asger Jorn or Pierre Alechinsky) are combined with impressionistic abbreviations in order to break with them simultaneously, and frame the image.

In the case of the Kleiner Blauer Delphin (self-portrait) as well, found in the right wing, Bernhard allows graphic elements to flow into the work. Starting from his initials, he has compacted the picture space in many layers and simultaneously washed it out with water. Are those “guardian spirits” that can be spotted on the transparent surface of the painting?

Not only the materiality of colour and the background are key for Matthias Bernhard, but also the location of the painting and the ambient light. He has created a panorama for the long wall in the back room of the Kunstpavillon – Lutzenberger Panoramaschal mit Krake & Kaiserblick or: DAS RÄTSEL DER BREZE (TW) & DAS GESTIRN DER BIRNE (OH WIE SCHÖN IST PANAMA). This 8.80 x 3.5 m painting was created beside the Lutzenberg in Kitzbühel (bordering an upland moor). It was painted lying outside on a meadow in front of the panorama of the Wilder Kaiser mountains. Weathering, surrounding images, surveying and approaching the materiality and the picture format with one’s own body are its essential parameters. He extended the painting radius during an unusually short period (2 months) in about 20 layers. The lowest (no longer visible) layer is made up of colour-field-like and calligraphic elements. The fact that the layer above always reacts to the layer below and thus creates an interplay between the different layers may be considered a technique similar to “weaving”. Analogies to Jackson Pollock’s early attempts at “dripping” from the 1940s, e.g. in the large-format painting Mural (1943), result when phases of automatic painting also alternate with other, more controlled sections in Bernhard’s work.

The large-format framed work on paper on the right-hand wall, entitled Schuppi, was created in early summer in a bright studio in Vienna, in the former Gasthaus Schuppich, and shows once again how dependent Bernhard’s painterly actions are on the place of work. An experimental attempt to achieve a certain consistency of colour and light, and the idea of transforming the paper into a fabric-like quality, influenced the creative process. With Bernhard’s “eyes” appearing repeatedly and the impression that the picture glows from the inside out, it shows the influence of a symbolist view of painting, as in Odilon Redon’s work, for example.

Almost as a commentary on Bernhard’s huge panorama, we find the large-format book Die Absicht und ihre Rückseite (No. 880, 2016) by Turi Werkner opened on a desk in front of it. Book covers worked from aircraft plywood and viscose felt pages make it (at approx. 30 kg) probably one of the heaviest books in Werkner’s library.

Behind this hang two paintings by Matthias Bernhard–Mädchenauge and Baby, Baby – Balla Balla / Das Blau des Himmels / Als wäre es Liebe or: WENN EINER EINE BLUME LIEBT and, just around the corner, Dark Sonority / Rudelgestrüpp. As with many of his works, the starting point here was ink drawing. Paint was then applied over several years in different layers and processes, and the surface enriched with small finds. These pictures reflect light and time, and thus become bridges of memory, invocations, comforters and charging stations, asking painterly questions and subsequently reflecting on the painting and its counterpart. They shimmer, and yet they are also like found objects chiselled in stone.

What is left over from the production? As a comment on this, every visitor can buy a portion of art rubbish from Turi Werkner at a price of 10 euros.

The similarities, but also and especially the differences in their artistic strategies offer excellent reasons for setting the first joint exhibition with solo works and co-products by Matthias Bernhard and Turi Werkner into a fresh context. 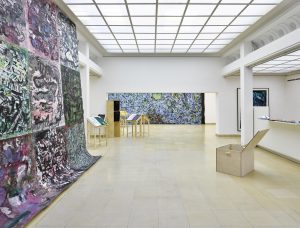