In 2015–16 the International Fellowship Program for Art and Theory hosted investigations that, in a broad sense, raise questions about the valence of value in the context of financial capitalism’s seemingly ubiquitous determination of all areas of life. The Fellows Andrea Bellu, Fokus Grupa, Anthony Iles, Benjamin Tiven and Marina Vishmidt focused in their respective work on pre-national, now forgotten, social structures in areas of the current eastern border of Europe (Andrea Bellu), egalitarian concepts in the field of interior design since Modernism (Fokus Grupa), on the blending of (monetary) value, art, and audio-visual media (Benjamin Tiven), and on forms of relations between artistic practice and social crisis (Anthony Iles & Marina Vishmidt).
Working with the fellows already mentioned some of their guests joined the exhibition: Matei Bellu (by invitation of Andrea Bellu), Zoran Todorović, kuda.org & Group for Conceptual Politics (by invitation of Anthony Iles & Marina Vishmidt), Audrey Morency, Anouk Muller, Pol Olk and Laura Winterberg (students of Fokus Grupa) and Erik Wysocan (as Benjamin Tiven’s cooperation partner).
The exhibition is the outcome of a debate between the projects, artistic ideas and working methods of the fellows; their artistic approaches, fields of investigation, and overall themes formed the starting point for the conception of the show. The curatorial approach has envisaged the step-by-step development of the exhibition’s leitmotif and display parallel to the progress in the works of the artists and theorists involved. Expectedly, these processes were completed just shortly before the opening and, in some cases, even after, during the first days of the exhibition as part of the programmed discursive events.  As a technical term, “nuisance value” describes the value subtracted from the setpoint of a system in the case of its dysfunction. In the social and also in the legal sense, “nuisance value” is the capacity of a person or a group to create “deviations” from a society’s accepted norms. Generally used in a negative sense, the concept of nuisance value is understood in the context of this exhibition as a positive necessity for the self-evaluation of a social state. When does a deviation become a nuisance? What type and degree of deviation can a democratic organisational system tolerate? What is the effect of a disturbance in the established structures of social memory respectively in dominant formations of knowledge? And what anticipations can be triggered by such nuisances? 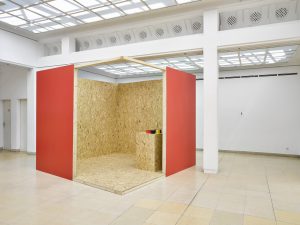