An emergency siren can be heard in the “Kleiner Hofgarten”. The noise is coming from a gilded horn loudspeaker mounted over the entrance to the Kunstpavillon. As one moves closer, the human quality of the siren becomes clear; it is both moving and simultaneously rather uncanny. Benny Nemerofsky Ramsay had the alarm signal made by recording the singing of a soprano in the Vienna Boys’ Choir (the Sängerknaben), and has entitled his sound installation The Return. Possibly, some longing also resonates in the boy’s voice. Or are we simply interpreting the pure voice, clear as a bell, in this way – for example, as a desire to rediscover something lost in the past, something simultaneously rather nightmarish? Benny Nemerofsky Ramsay, who has been creating large complexes of work in which the human voice operates as a key artistic medium since 1999, lays out an acoustic sphere, an emotional landscape in the park, which visitors to his solo exhibition walk through as an introduction, so to speak.

The exhibition circuit begins with a handwritten letter, a letter of thanks to Spanish philosopher and queer theorist Paul B. Preciado (born Beatriz Preciado). In the essay “Une autre voix” (A Different Voice) Preciado provides a moving description of his vocal metamorphosis implemented by taking testosterone. Benny Nemerofsky Ramsay says that his decision to name the show in the Kunstpavillon after the abovementioned text should be seen as homage to Preciado. Not being able to find a postal address for the author, Nemerofsky Ramsay wrote him a digital message, saying that the letter is waiting for him here and that he can take it from the wall, should he ever come to Innsbruck. A gesture. A gesture which, together with a quotation from Preciado’s essay fixed with adhesive letters onto the floor of the entrance area, lays out the basic mood of Une Autre Voix like a carpet.

For a long time, the artist has been investigating the gender of voices[2] and the space between male and female, between being a child and an adult, between human, animal and machine; he is more interested in the emotional quality of sound than in language. He begins the new audio piece developed for the exhibition, Noyades No. 1, with the sentence: “I am thinking about a voice.”

It is the voice of water in which someone has just drowned. The start of his deliberations was the rather unlikeable character, Wozzeck, in Alban Berg’s opera of the same name. He drowns in a pool. Benny Nemerofsky Ramsay approaches the story poetically. He thinks that Berg’s variation, employing an entire orchestra to portray water musically, is suitable for an ocean but not for standing water, and therefore selects the piece Syrinx[3] for solo flute by Claude Debussy. He then gets recorder player Anna Fusek to record primarily the trills of the piece. In general, trills are employed to create moods and effects, and this is also the case in Berg and Debussy. In musical notation, trills are represented by “tr” followed by a wavering line of different lengths. Wikipedia refers to the trill as “a type of musical ornament”[4], the artist as “a watery ornament”, and so he stages his sound piece in a suggestive environment comprising drawings on music paper, set on music stands, and trills cut out from neoprene hanging from the ceiling. It is no coincidence that these are reminiscent of waves or waving sea weed. The recipients move about, wearing headphones, inside this associative ambience. As a narrator, Benny Nemerofsky Ramsay raises questions that he often leaves unanswered. He ends the piece with a deep trill that sounds as if it is emanating from the very heart of the pool.

The video installation The Last Song is not about death but a kind of return. Behind a folding screen, in front of which the protagonist in the film is also standing, we are witness to a transformation. The voice of a baritone faces a crisis and transforms into that of a boy soprano. The metamorphosis of the adult male voice into that of a child, which implies the artist’s fantasy or desire to encounter his earlier self, clarifies the fundamental nature of this theme. Problematic, damaged, strange and uncanny voices also have a personal connotation for Benny Nemerofsky Ramsay, who calls himself an artist, letter- and diary writer, and correspondent.

In the same room as The Last Song a list of 18 names of artists and artist groups in silver letters is presented on the wall. It reflects, in the interior space, the second exterior installation, Nightbird, a sound work broadcast in the park through a silver-plated megaphone fixed in a tree. At the less representative façade on the left-hand side of the Kunstpavillon, i.e. directly behind the list of artists, Benny Nemerofsky Ramsay reinterprets the sound piece Bird Calls by Louise Lawler from 1972. At the time, she parodied the names of her more prominent, acclaimed male colleagues as bird calls. In his “cover version” Nightbird our artist sings the names of artists he wishes were his mentors, some of whom died of AIDS, as melancholy bird calls. There is one name missing in what looks like the list of artists for a major group exhibition: Benny Nemerofsky Ramsay. He regards this fictive community of queer artists as unreachable, remaining wishful thinking for him.

[2] Gender of voices (translation from German to English of I. E.)

[3] Syrinx is a water nymph in Greek mythology. 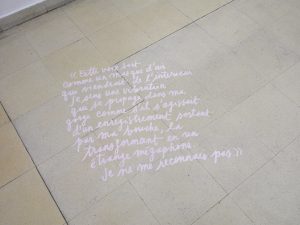