The artist has sent us a video in which he talks about his work Nothing and his artistic practice.

Sometimes you gotta close a door to open a window.
(Tyler, The Creator: New Magic Wand, 2019)

ALL IN NOTHING In some currents of Buddhism, the concept of emptiness/ nothingness is based on the idea that the world and all things in it, as they present themselves to our senses, are not real. Instead, they represent images produced in this perceived form by our own consciousness.

Beings are like semblance (…), like a dream. For semblance and beings are one, not two; dream and beings are one, not two. All things are akin to semblance, to a dream. [1]
This is an observation also applicable to the title-giving spatial installation Nothing by Alfredo Barsuglia. In the exhibition room, shrouded in mist, stands a precisely crafted wooden boat. The sails are already set. On the right are three black pedestals with identical dimensions, lined up in a row. Three black wind machines are enthroned on top of them – almost military in appearance. In the second half of the room: Nothing. This nothingness, the empty space, accentuates the existing architecture – skylight roof, decorated ventilation shafts, clad steel girders, stone floor – of the “lower summer house” first mentioned in a document in 1564, which was adapted into an exhibition space in several steps at the beginning of the 20th century. A space that is inscribed not only with architecture but also with history. Thus, the nothingness is not nothing, but something – an insoluble paradox – to which Barsuglia has devoted himself in this sculptural and performative large-scale installation. For the artist, the preoccupation with nothingness represents a conceptual decision – to focus the gaze exclusively on the space, the boat and any attempt to control it, to steer it: a parable about life, a reflection on where from, where to, and why.

Barsuglia’s staging of the space involves an irritation of the gaze – an artistic strategy that he also uses in his latest exhibition “Take on me” at Kunstforum Vienna, where he located a scene from public space in the exhibition space. In an interview with the daily newspaper Der Standard he says: I walked through the streets of Vienna for six months and observed what was hidden in façades in order to reproduce it, as true to the original as possible: screws, dowels, scribbles… You would not believe how much is going on there![2]

The artist has worked with similar meticulousness on the installation in the Kunstpavillon in Innsbruck: for example, he examined the statics of the room in order to get the boat, which is shrouded in fog, on the move. The journey evokes daily political media reports on Greta Thunberg’s passage in a sailboat to the climate summit in New York, or pictures of people seeking refuge at the external borders of Europe. The full boat as a symbol of political power strategies. Looking back a little further, the metaphor of the ship has been used repeatedly in poetry and literature since antiquity. In Romanticism, sailing ships were also a symbol of social and political upheavals in painting. In mythology, the boat is symbolic of life and death, the crossing into the realm of the dead.

In order to be able to act as directly as possible, Barsuglia looks for strategies to involve the audience in his practice. Often the boundaries between artistic installation and social experiment are blurred, which also implies the intended and accepted possibility of failure. It is not surprising, therefore, that his works are often described as abandoned film sets in which the audience becomes the actor, the doer. In Innsbruck he has already drawn attention to himself with the temporary intervention “Hotel Public” (2013) in public space. Everyone was invited to stay overnight in this unusually small but fully functional building in front of the Landesmuseum, and so to start the day in the morning traffic between pedestrians and motorists. Barsuglia’s multifaceted and interdisciplinary works always oscillate between the sculptural and the ephemeral, the material and the immaterial – and are like a permeable landscape that makes it possible to open up new fields of dialogue. In Nothing this artistic approach is reflected in the shape of the spatial installation described above and its performative use. On selected dates and after prior registration, individuals are invited into the exhibition space for about 10 minutes, which is already inhabited by a child:

the child recites a text written by Andreas Oberprantacher especially for the performance. This poetic and cryptic-looking text component is at the onset of the performance and at the beginning of a world that is opening up: possibly located between illusion and dream?

The space is like a vacuum, an interspace that opens up – in which two people find themselves in a familiar-unfamiliar situation, and in which very personal reference systems, chains of association, narrative and pictorial worlds unfold. The opportunity to check these is given. Barsuglia himself emphasizes that in his artistic practice, he refuses any set reference. Rather, he always observes his own system of references, breaking it down in order to find out what fields of possibility, imagination and experimentation lie beyond what has already been tried and tested. The possibility of failure is clearly inherent in this procedure. He also offers this strategy to the audience:  Where does my, your, our understanding of this world and the society we live in actually come from? What happens when we examine entrenched viewing strategies, behavioural and thought patterns, and, if possible, break through them? Nothing thus becomes a moment of in-between, a mythological crossing or an ephemeral temple, in which the visitor with a boat (and a child) is left to his or her own devices and encouraged to critically examine ideas about the world, beings and things as they present themselves to our senses.

Alfredo Barsuglia, born 1980 in Graz, lives and works in Vienna. Barsuglia has received numerous awards and scholarships, including the Monsignor Otto Mauer Prize (2019), a prize at the 36th Austrian Graphic Art Competition (2019), the Strabag Artaward International (2018), the State Scholarship for Fine Arts (2017), the City of Vienna Promotional Award for Art (2015), the Theodor Körner Prize (2013), the City of Graz Promotional Award for Art (2007) and the MAK-Schindler Scholarship in Los Angeles (2006). 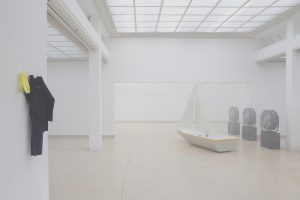