The official representative office of the President of the United States is located in the West Wing of the White House. Since the 1930s, the interior has been renewed after each change in president: furniture, floor coverings, artworks and busts are then replaced. While Trump grew a forest of flags behind his desk and chose a painting of the controversial President Andrew Jackson (seventh president of the United States, 1829 – 1837), Joe Biden has installed busts of Rosa Parks (civil rights activist, 1913 – 2005) and Martin Luther King (civil rights activist, 1929 – 1968). The staging of the space thus suggests the political stance of the respective president and becomes a backdrop for those working there: John F. Kennedy together with his children at play (1962), the telephone conversation between US President Nixon and the astronauts of Apollo 11 (1969), or Kanye West’s visit to Donald Trump (2018). Images emerge, are transported by the media, and inscribe themselves into the collective memory.

I regard the Oval Office as a kind of stage-like space that is only unusual in its shape. Moreover, far-reaching political decisions are made there, which are based on a different ideological stance depending on the individual president. The space is like a territory in which a multitude of different inscriptions overlay one another and realities intersect. (Wolfgang Wirth in conversation with Petra Poelzl, 27.05.2021, Neue Galerie Innsbruck.)

On the one hand, Wirth’s examination of the representative office space’s geometric form is reflected in the newly produced series OO-1 to 7; on the other hand, it becomes visible in the true-to-scale replica of the Oval Office’s floor (75.8 m2), which – similar to a stage construction – inscribes itself into large areas of the gallery (95 m2).

In his large-format paintings conceived for the exhibition, the artist abstracts and multiplies the elliptical form – and brings together two different characters of work: sometimes, the form is filled with subtle colour gradients demanding our intense perception and enclosed by regularly worked, radial, two-colour linear segments; elsewhere there is a St Andrew’s cross pattern inside the ellipse, which is surrounded by delicate pastel surfaces.

Due to their colour scheme – blue, red, black, white – the stricter sections resemble the deconstruction of national symbols; meanwhile, the pastel-coloured surfaces develop a pull, almost as if another possible world was opening up behind or within them.

I find that painting is capable of creating spaces of possibility. The colour gradients that I use in these paintings do not end, at least in my imagination, at the respective edge of the picture; they can be imagined as continuing into infinite, vaulting chromatic spaces .(Wolfgang Wirth in conversation with Petra Poelzl, 27.05.2021, Neue Galerie Innsbruck.)

Allowing ourselves to be guided by this pull, another space is entered – one that is fully occupied by the elliptical floor construction. In this space, a void has been created deliberately – i.e. the floor area of the representational space without furniture and décor – and set to zero point “in order to imagine and evoke alternatives to the political attitudes and content represented there up until now”. (Wolfgang Wirth in conversation with Petra Poelzl, 27.05.2021, Neue Galerie Innsbruck.) A permeable space is created, in which fragments of realities, imaginations and possibilities by the artists Heba Y. Amin, Tony Cokes, Suzanne Lacy and Howardena Pindell are combined and interwoven to oscillate with Wirth’s paintings, the conceptual exhibition architecture, and the flag designed especially for the exhibition by Diane Esnault and Raul Walch.

Together, these artistic works create a third space in the sense of Homi K. Bhaba, one of the most important postcolonial literary and cultural theorists of our time. (Homi K. Bhaba: Die Verortung der Kultur, Tübingen (2000)). A third space can emerge wherever people with different knowledge or from different cultures meet and discuss meaning and content. The core characteristic of a third space is that new content and cultural differences are being created constantly. These renegotiated meanings in the third space are not set in stone either: they are dynamic, performative, changeable and temporal. However, the contents negotiated in a third space are not necessarily better, more correct or freer of contradictions than others. They simply represent alternative constructions and ways of thinking – and do not appear fixed and rigid but instead flexible and permeable. 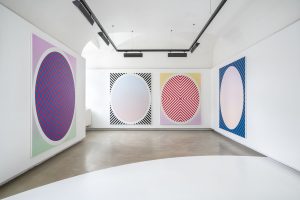